Taken from the NBRC Hall of Fame Archives 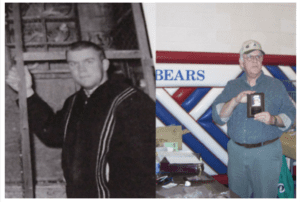 Born, raised and still living in Iowa, Jim started his pigeon/Roller career in 1954 at the age of nine. By age 11, he was the Secretary for the local All-Breeds Club. He judged his first coop show at 19 and his first fly at 24. Jim served the old United Roller Club as a District Director, worked on several committees and was the American Pigeon Journal reporter for nearly 20 years. In 1990, he was awarded the United Roller Club Silver Service Award.

From 1969 to 1971, Jim published the bulletin for the Iowa Roller Club and followed that by publishing the national bulletin from 1971 to 1975 for the old Pensom Roller Club.

Jim founded the Frank L. Rexroat Memorial Fly in 1969 (currently known as the George A. Reeve/Frank L. Rexroat Memorial Fly) and has worked to keep it going as a coordinator, judge and participant over its 44-year history (as of 2013). Jim has also coordinated other local/regional flies and served as host to a number of World Cup and NBRC fall fly judges. Jim has served as President of the Iowa Flying Roller Club and the Central Roller Club. Jim served the CRC in various capacities during 32 of its 37-year history and is currently the CRC Secretary-Treasurer.

Jim has judged many state and local flies and has served as a coop display judge at National and District events and conventions over the years. He has also given talks at several national events.

Jim served on the 11-bird fly Rules Committee for the NBRC as well as the Hall of Fame Committee. He was elected to the NBRC Hall of Fame in 1991. Jim has been the moderator/owner of the popular “Earl’s Roller List” for the past 12 years, taking over from Earl Allen in 2001. Jim has authored many Roller articles during his 59-years in the hobby, including sections of Tom Hatcher’s recent “Keys to Competition Rollers” and also Joe Quinn’s “In Search of those Fabulous Whitteghams.”

Jim considers himself a relatively small operator compared to some; but his birds have stacked up well over the years as four 2nd place finishes in his state fly, two 2nd place finishes in the World Cup and NBRC regional competitions and many wins at the local level indicate. Jim won the CRC Futurity in 2006 for the third year in a row. Jim has helped many over the years with birds, usually not charging anything for the help.

Jim wanted to add that he dislikes tooting his own horn, saying that any work he did was merely “paying his dues” for the enjoyment his birds have given him and especially getting to know the many fine people connected with the sport. At the top of this list are his two greatest friends and mentors: the late Paul Vaughn and the late George Reeve. The Roller family he has had for 43 years goes back to Reeve and Vaughn as well as a family of Hardesty birds he’s had for the last 22 years.