Interview with One of America’s Top Flyers, Rick Mee of Washington (2013) 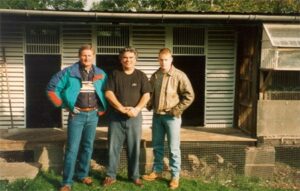 This bulletin special was conducted by in April of 2013. This flyer is one of the most accomplished flyers in roller flying his-tory despite the fact that he took basically a 7 year hiatus. He currently stands in 4th place all time in Master Flyer points and should be receiving his Lifetime Master Flyer Award within the next year or two as he is only a few points short. *Editor’s note: Rick has received his LMFA already* He has made it to the World Cup Finals an astonishing 8 times finishing as high as 2nd. Last year in the 2012 NBRC NCF, he placed 2nd in both the 11 bird and 20 bird Championship which is quite a feat. Without further ado, here is the interview special with Rick Mee

TY: Please state your name, age, along with where you live if possible.

TY: When did you get started in flying rollers and who helped you initially with your first roll-ers?

RM:Started at age 9. Mom would drop me off at the late Jay Thomas’s in Yakima, WA on competition day. All the older guys would show up and share their NBRC bulletins with me, show me pictures out of Pensom’s book, and haul me around all day to different flyer’s lofts. It was heaven for a young kid, did this until I went off in to the Army in 1988.

TY: What family/strain of rollers did or do you have?

RM: My base family are the birds I got back in WA in the 70s which were Pensom and Plona. To these I added a Baker/Jac from Wendell Carter in 1991 because she was so awesome, a Higgins cock in 1996 for the black color, a few Westfalls in 2006, and year before last a few more Westfalls, both times for their flying style which is a nice butter-fly. Every time I bring in a pigeon it is bred

back to those base pigeons from WA that I started with because they have the velocity, style, and breaking together that I like so much.

TY: Which strain have worked best for you and why?

RM: I have made my own family by simply using the best pigeons I could get my hands on, and only made a cross when I felt it was necessary. While those early on Pensom/Plona birds are the main base, those recent Westfalls did help in improving flying style and earlier development. I constant breed back toward my side of the family to try to retain the velocity, style, and big breaking that my birds are known for, trying to keep a little Jaconette from Bob Westfall so they can fly slow.

TY: How many breeding pairs do you have and how long do your birds fly before they can become stocked as breeders?

RM: Right now I guess I would say I have about 10-12 very good pairs that can make very good rollers, they were all very good themselves. I prefer to fly them for 18 months or more before stocking, but here in TX I found that to be near impossible due to the birds of prey. Soon I will be back in central WA where there are far fewer hawks, hopefully I can go back to flying them for a few years before stocking and possibly even returning birds to the air which were once stocked……an activity that is impossible to practice here unless you don’t want to have any birds left.

TY: What exactly do you look for when selecting breeders? A particular trait or traits?
RM: Main trait is they must go on the breaks, and I prefer birds which roll from the front and seemingly initiate breaks. Of course like most roller fanciers velocity and style are paramount, depth, frequency, and bird breaking when they are supposed to.

TY: What characteristics or traits do you avoid when selecting breeders and flyers?

RM: Birds that no matter how fast, clean, or deep they are, they roll individually, do not kit, bump, roll down, fly above the kit. They sim-ply have to be the total package for me to want to breed from them. There are no “perfect” rollers, never will be, but we must breed from the ones which are damn near as close to perfect as possible.

TY: Is there a particular wing style you prefer and why or why not?

RM: I prefer the bowed in wing style, the illu-sion suggests the bird is actually touching wing tips. I detest X style, and I do not get all excited about H style like some do because these are not that difficult to produce in com-parison to the bowed in wing types.

TY: Tell us a little about your preparation weeks and days leading up to a comp fly. What do you feed? How often do you fly?

RM: This could get very long! Ha Ha I basically fly them every third day and on a mix. For 20 birds 2 cups day flown, 1.5 first day of rest, and 1 cup the day before flying again. Then I fly them for 3 days straight on barley to get them in a very light, buoyant con-dition, also to get them all mentally and physi-cally on the same page, 1 cup per day. The first rest day they get 2 cups of feed. On this day I want to carb load the birds and give them a little protein. They get about 1 cup milo, 1 cup red wheat, then 3 peas down each one’s throat. Next day if I think they will be too strong I will give them 1 cup of milo, if I think they need to be built up 1 cup of red wheat. On these two rest days prior to comp day they have no grit, clean water with no ad-ditives, and the grains are fed separate, espe-cially the peas down the throat.

TY: Who has been the most influential person to you in regards to rollers? In other words, who do you consider to be your mentor?

RM: No mentor really, just all the guys back in the Central WA Roller Club I grew up with in the 70s and 80s. Each one of them gave me a little to run with, and I learned a lot of what not to do by paying attention to what they were doing. I also rubbed elbows with many top roller men in my early twenties like George Mason, Les Bezance, George Kitson, Monty Neible, Jerry Higgins, JoeBob Stuka, Don Oullette. All top roller men and took a little from all of them.

TY: You have been very successful in flying rollers. Could you explain have been able to stay atop so consistently?

RM: It was not always easy, especially when I was in the Army. When I went on recruiting duty I did not compete from 2001-2006, just too busy, or when I was in Iraq in 2005-2006. Nonetheless, I did well back then because I worked very hard and paid very close attention to my birds. Most of my training was late evening landing the kit in the dark. I had fewer hawks then than I do now and only bred about 50 a year, now I have to raise 100 to have 50 left and they usually are not the better ones. I always said then and say now, if you do not know each and every one of your birds inside and out, then you will not do well with rollers. Being consistent at anything in life is a mindset, make your mind up you want to be good at something and put aside all your side projects…….focus on your main goal! Remember, family comes first!

TY: Lastly, do you have any additional words of advice for your fellow fanciers?

RM: If you know in your heart you are going to be a roller fancier the rest of your life and the birds of prey are making it impossible to fly successfully if even for your own enjoyment, move if you can to a place where you can fly in safer skies. That is exactly what I am about to do, move back home to WA so I can hopefully win the World Cup one day. Also, when your birds are up, look up. If you come to my place and say you want to see my birds perform, but you are looking down and kicking dirt, then you might as well be breeding Fantails, and I will not invite you to come back.

TY: I want to thank Rick Mee for this outstanding interview and for his time. The last word of advice reminds me of what a fancier in MN. He said he could tell if a roller guy will be successful or not; if he keeps his eye in the sky when birds are out, he will likely be more successful than the guy who is already looking at birds on the ground. So remember, eye in the sky!

Editor’s Note: Tou Yang interviewed quite a few of America’s top flyers as part of a series of interviews for his local club between 2011-2013 and that is where it was first published.