originally written for the APJ NOV. 1982 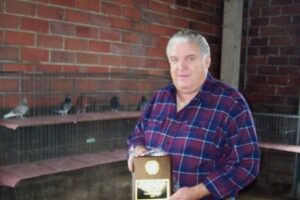 One of the big names in the performing roller world is that of Bob Munson of Alsip, Illinois. Bob has invested many years in the development of Rollers. Since he was nine years old he has raised these birds, except for a three year hitch with the Oaklawn, Illinois, Racing Pigeon Club, where he flew homers as a junior member.

The story of Bob’s search reminds one a bit of Bill Pensom’s story. Both men, with a vision of what a performing roller should do, set out on journeys that led them from city to city and loft to loft. As each man traveled and found an outstanding performer, he endeavored to bring it home to be a part of his developing family of birds.

Bob came to a point in his roller career where he thought he had good birds, including good performing bald heads and almonds.He was impressed with his own birds’ performance until one day in 1966 he visited the loft of Carl Benson of Matteson, Illinois. Bob reports that Carl’s kit of Pensom strain Birminghams flown that year were the best he has ever seen in his life. Nothing he’s observed even comes close to those flown by Mr Benson at that time.

At that juncture in his life, Bob changed his stock of birds. The search continued, however, for other outstanding birds. His travels took him all over the United States and Canada to see various kits of rollers in action. When he found stock as good or better than his, he attempted to obtain birds. Some of his purchased stock produced good performers and some not so good. The latter type were quickly discarded.

Bob now believes that he has performing rollers that are about as good as they come.

It was on one of his search-to-discover journeys that Bob met Lazar Talevski of Crown Point, Indiana. Mr Talevski, now a close friend of Bob’s, introduced him to the Symrna Roller or donek. Thus began a whole new love affair. Here was a new exciting, performing pigeon that would give him a whole new set of thrills with lightning fast dives, axial spins and barrel rolls. Bob decided that the doneks would be a nice addition to his Birmingham’s, which were becoming rather routine to him.

Bob Munson is now a donek man. He finds that Birmingham’s and doneks are very good breeds to be kept by the same fancier as long as they are housed separately and flown separately.

Bob says that he is fascinated by the fantastic donek.

Those who know Bob Munson like him. He has a reputation for being a pleasant, positive and moving force. His strength and leadership have been most helpful to the pigeon fancy. Bob will be a great assistance in the future as we attempt to introduce the spinning donek to the American Pigeon Fancy.

The accompanying photo shows Bob holding two of his outstanding doneks. They are performers that are attracted the attention of experts. Bob’s friends in the donek fancy tell him that the bird he is holding in his right hand, #23, black patch, cock bird is just about as good as they get. Bob plans to use this particular bird in a key position in future breeding of the fantastic doneks.

Bob doesn’t have any doneks anymore. He says they are the only bird he likes better then the Birmingham’s but there isn’t any competition for them. At least not yet (smile).