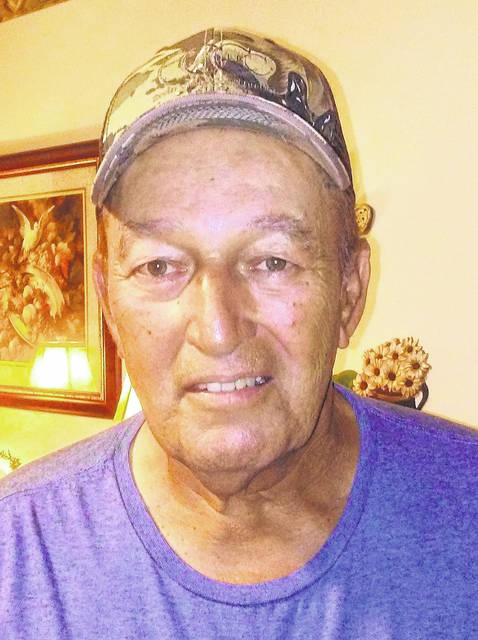 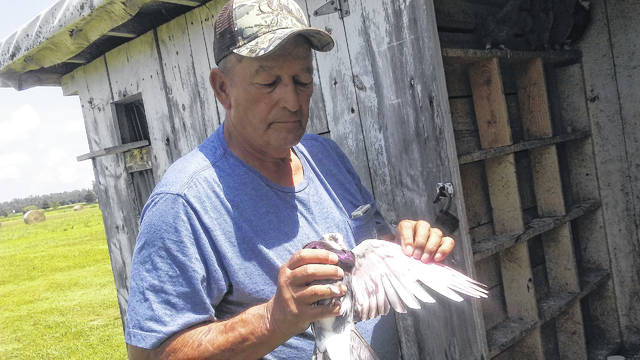 Gordon Branch extends a marked wing on one of his nearly 200 Roller pigeons. He said he marks the wings to keep up with the pigeon and its flight patterns. 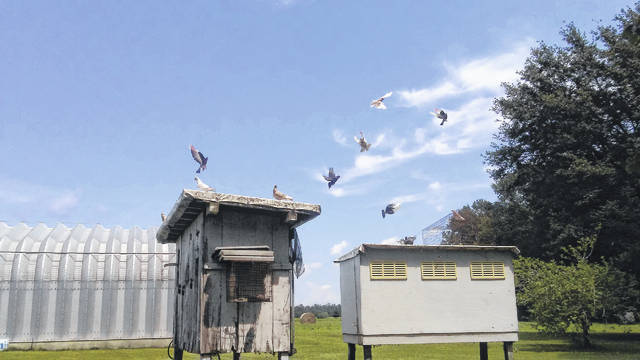 Gordon Branch’s Roller pigeons take flight at his home in Rowland. Roller pigeons are a domesticated breed of pigeon that has the ability to tumble or roll in the air. 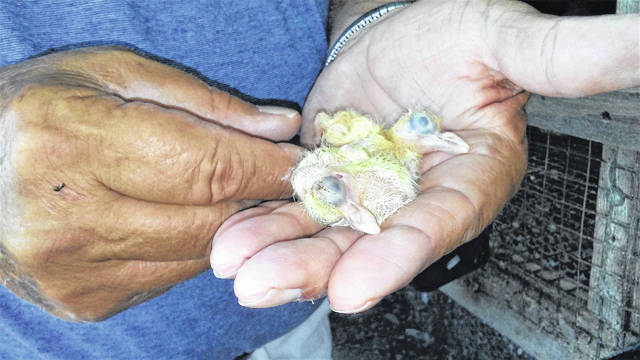 Gordon Branch holds two Roller pigeons born on Monday. He has been breeding them for nearly 30 years. In about 10 days, Branch will place a red band with his identification number around each bird’s foot.

ROWLAND — Tumbling pigeons are helping a Rowland man deal with the stress of retirement.

Gordon Branch, a 68-year-old who once worked as a commercial plumber, has been raising Roller pigeons for nearly three decades and has accumulated about 200 in his back yard.

A Roller pigeon is a domesticated breed or variety of pigeon that has the ability to tumble or roll in the air. The spinning can appear to be so fast that the bird looks like a ball of feathers falling toward the ground. They quickly recover from the spin and return to their flock throughout the flight.

“They actually spin backwards,” Branch said. “Just picture a bird flying and then it just drops.”

There are many sites online that theorize about the reasons why the pigeons roll. Some say it’s because they are actually having seizures and it’s a biological defect. Others say it is something the pigeons have learned to deter predators, such as hawks. Either way, Branch sees the pigeons as a way to decompress.

After going through a heart attack and two hip replacements, Branch retired, and pigeons became his focus.

“I had a little pity party,” Branch said. “And I’d just sit out in the yard and it got me through it. You know, therapy.”

Branch uses many adjectives to describe the hobby.

His interest with pigeons began at early age.

“Most people that got into Roller pigeons started off with pigeons as a youngster,” he said. “Most of them were common pigeons, where you went into the barn and caught them.”

Branch said over time people evolve from having common pigeons to different breeds.

“People don’t realize that there’s over 200 breeds of pigeon,” he said. “Everything is not a barn pigeon.”

When Branch got into his teen years, his focus was pulled toward sports, girls and later the military. In 1991 he got a call from his cousin on Thanksgiving Day, asking him if he wanted to go buy pigeons. Branch said he bought a couple, and he later studied the birds.

Later, while doing a job in Fayetteville, he came across an American Pigeon Journal Magazine. He saw the name Rick Mee, a military man stationed in Fort Bragg who raised Roller pigeons. Branch searched through phone books until he found Mee and gave him a call.

“I called him, talked to him, got invited to his house, looked at his birds. I knew then what a Roller was supposed to do,” Branch said. “I’d never seen it done like that.”

Branch and Mee became friends and began traveling to see other breeders and their pigeons. Unlike homing pigeons, more commonly known as “messenger” pigeons, Rollers consider home wherever they get their food. So they can have multiple homes. It is up to the breeder to establish the pigeons’ home.

“Homer pigeons only have one home,” Branch said. “They (Roller pigeons) learn their area and that’s where they stay.

To ensure his pigeons return home, Branch releases them only when they are hungry. This may require skipping a day of feeding.

Weather also can affect the birds’ flight pattern and when they return. Branch keeps a shirt out on a clothesline to see how strong the wind is blowing each day before releasing them.

Branch said the birds need to fly in a figure-eight pattern so they’re more likely to roll. Winds can prompt them to fly in a circular pattern.

Although relatively small, the hobby of raising Roller pigeons crosses over race and economic standing, he said.

“As opposed to hunting and fishing, it’s a cheap hobby, but it’s hard work,” Branch said. “A friend of mine told me, if it was easy then everybody would do it.”

Branch said he hopes that more young people will get involved in the hobby.

Anyone interested in raising Roller Pigeons can become a member of the National Birmingham Roller Club by going online to https://nbrc.online/.