The following pictures were taken by Brian Neal of XXXXXXXXXXXXXX.    Brian was photographing his friend, John Priestly’s, kit in action.

Brian posted these on a thread in Facebook and there was a healthy discussion about them.  Before we get into the comments it is important to understand how difficult it is to capture the spin because of how quickly it occurs and ends.  The human eye can take in action that is difficult to capture via the camera or recorder.   We applaud Brian for a job well done in capturing these birds in action.

One final note, these pictures are NOT all of the same bird.  As you will see later, this is very uniform kit and scored high, but pictures of different birds were used to create this essay on the dynamics of the roll. 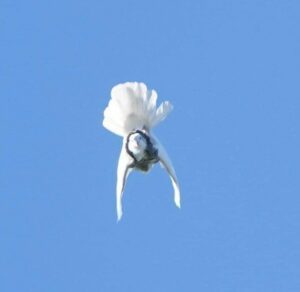 Here we see the beginning of the roll.  The bird is spreading it’s tail, dropping it’s wings and most importantly, we see how it is tilting it’s head backwards.

Your Webmaster has repeatedly tried to capture that moment when the bird begins to coast and started the head-tilt because that seems to always proceed the roll or spin.  This action takes only a split second and because of this is difficult to catch on film. 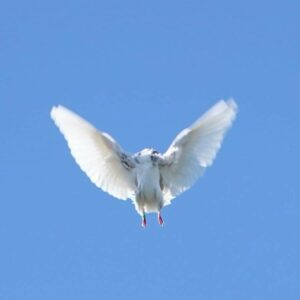 In this picture we see the Roller with it’s head far back, beginning the roll.

It is difficult to follow this while watching the birds, but it appears that the initial roll is almost always acocmplished with the wings out-stretched in this manner. 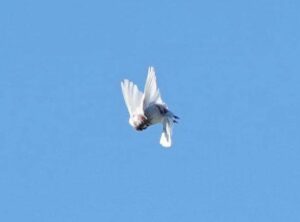 In this picture you can clearly see how far back the Roller is holding it’s head.  In fact, at first glance the bird appears to have no head! 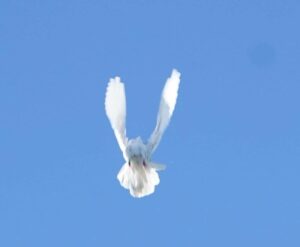 And here we have the Roller having rotated onto it’s back.  Notice the clean alignment of the tail, body and wings. 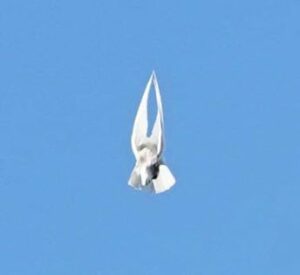 In this picture the Roller is in mid-spin, over on it’s back, tail spread and wings together.  Great style! 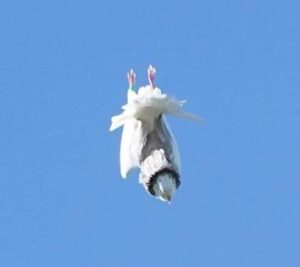 The Roller is now completing the revolution.

At first glance this picture looks like the bird is rolling backwards, but it is simply an optical illusion.

Notice the tail is still outspread?  This is a nice look and will be discussed in a later frame. 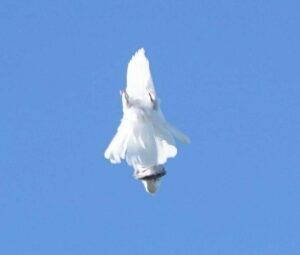 This is a nice shot of a Roller from directly below.  Notice how the wings are held in the same position.  This uniformity eliminates the “dishrag look” of some bird’s rolls. 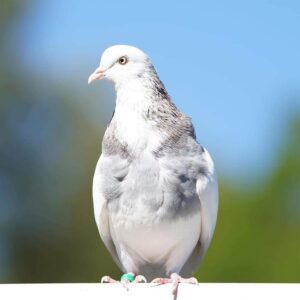 After coming out of the spin this Roller shows the classic hallmarks of a fast spin – the messed up breast feathers.

In this next group of pictures the roll will be reviewed from the side.   Many of these birds have been marked with color to tell them apart – don’t be distracted by that. 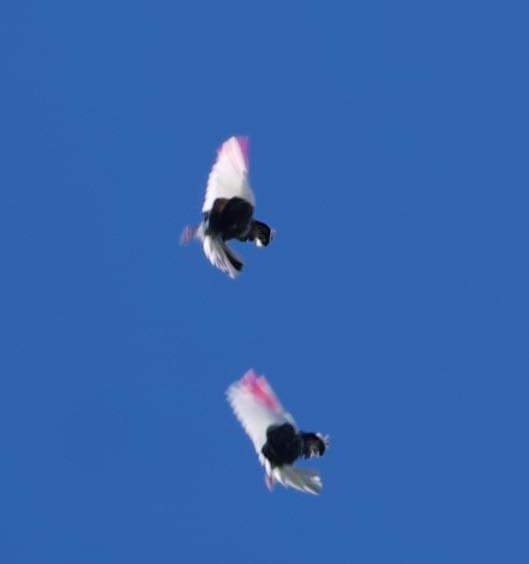 These two Rollers are in mid-spin, slightly different positions.

Notice how close the heads are to the tips of the tail.   When the Roller is spinning this close proximity is what gives the illusion of the “hole” when viewed from the side. 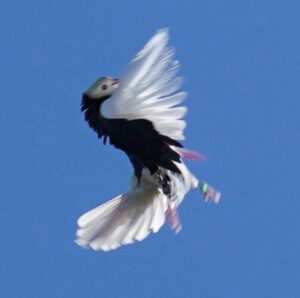 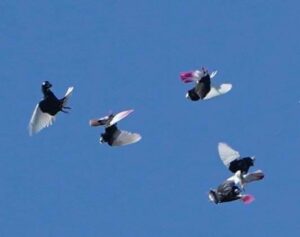 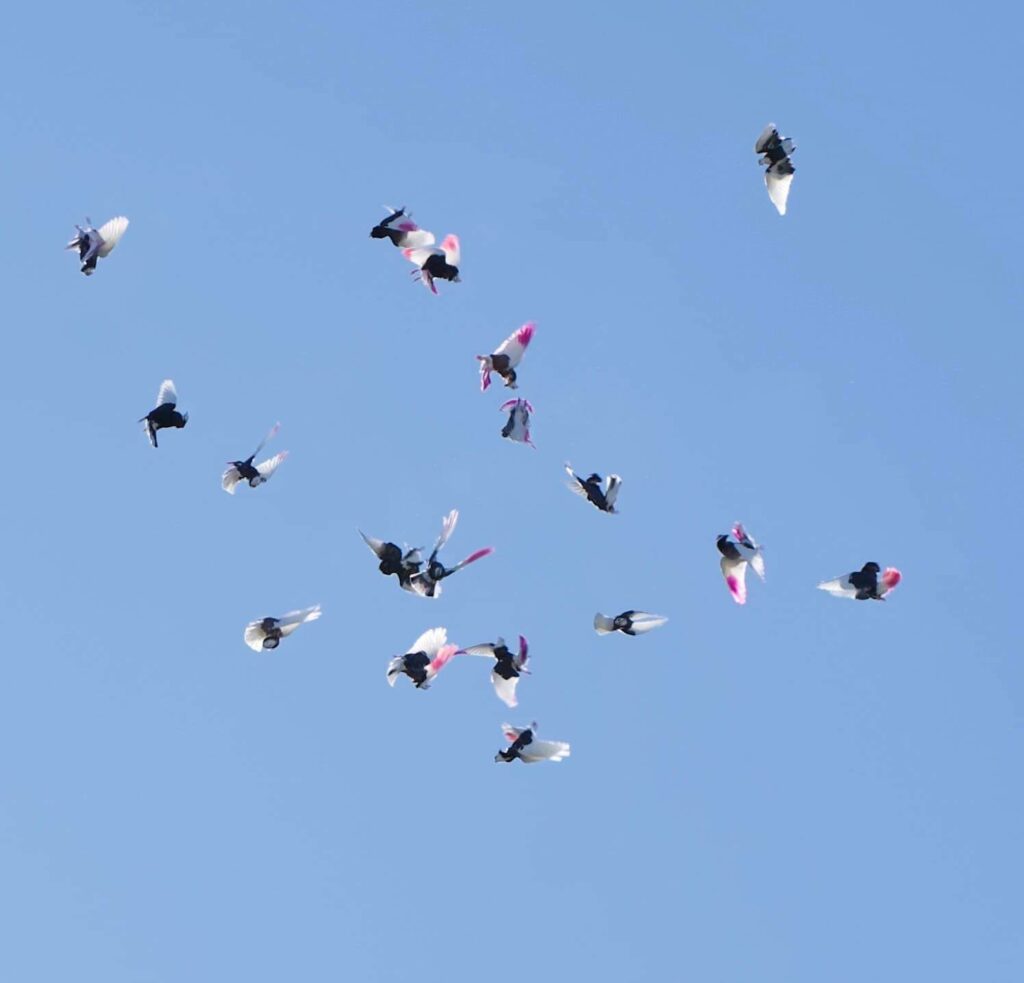 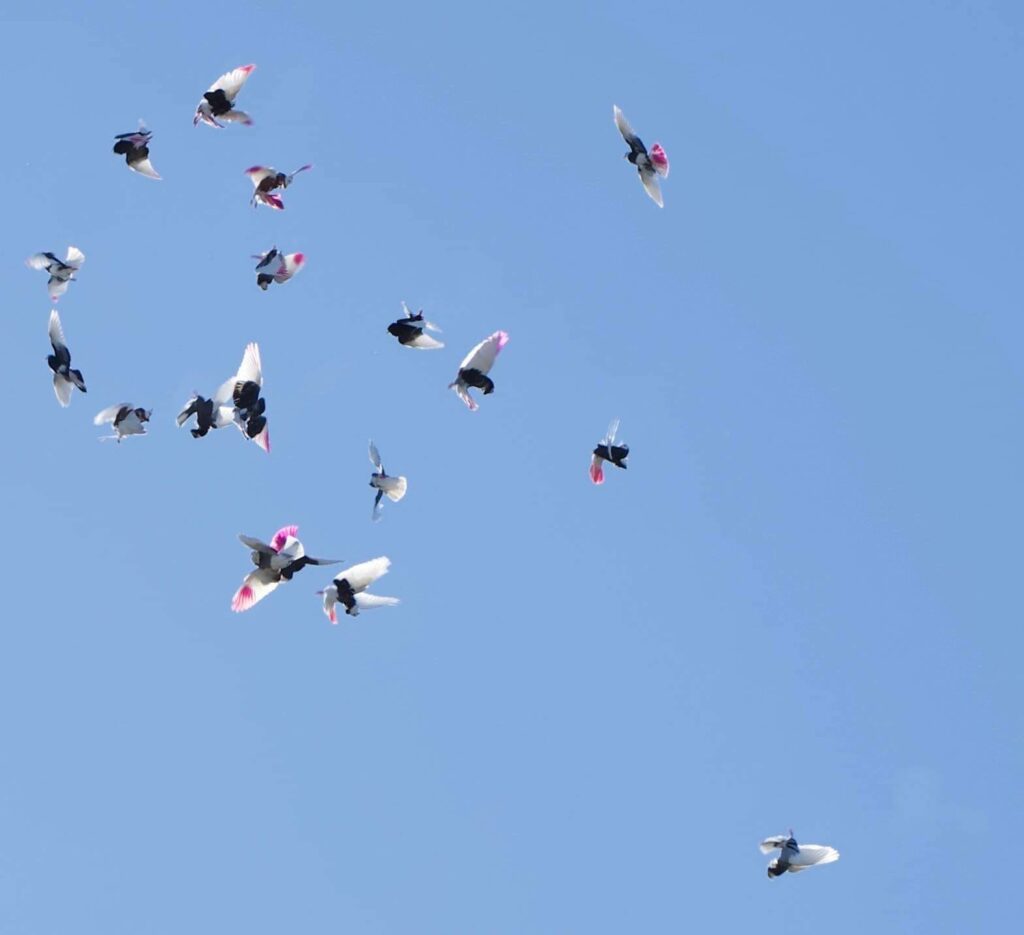 An interesting comment was: “One I see in your pics that is interesting is how many of them are “hackled up” like a game cock. I’ve never noticed it so prominent.”

Brian replied: “regarding those hackled up neck feathers, the blacks & the white flighted birds are fairly different rollers, I wouldn’t be thinking it was a style thing causing it, kind of makes me think looking at them pics, its possible that’s where the most drag is formed on a spinning pigeon?”

A much more heated comment thread started with and individual stating “Bill Pensom tells us ,,the Bird stepping on the breaks , ( so to speak”) . is NOT”, the Secondaries !!!
They use the TAIL,” as a rudder, along with the wing’s , as the break’s ..Long secondary’s ,, are for Lift ! Heavy- Back cover, flashes across , the hole ,, distorting the edges of the Hole”. ( Donut- Hole”) ,,,in the Side , of the roll.”

Jon Farr wrote: if you truly believe that “they use their tails, not secondaries as breaks” because Bill Pensom said so, then I’m disappointed. You can pull out the tails and it will not cause birds to roll down or fail to exit a roll normally. I’ve done it dozens of times and I’d invite you or anyone else to come see, or better yet try it yourself.”

The reply was “Not just because Pensom said so. But since he did say it . I do believe it ! A true master of the breed.”

Jay Vantress also commented: “I have also pulled all the tail feathers on a bird to show someone that they don’t roll down and can stop without a tail. People believe so much without testing for themselves.”

Jay continued: “you keep showing clips from books we have all read that were written 50 years ago. Nice writing, if you see a bird that performs in the air it means that that bird is built right for the performance that you saw. Does not mean that every bird needs to be built like that. Some birds seem to be off type and they are still high velocity spinners. Man has made up all these ideas that seem right, but could not be proven back in the day. Some of it could be proven today, but who cares enough to try?”

As you can see there are differences of opinion on how the good spin is done by a Roller.  Even yet we do not really know what it takes to makes a good spinner.  If history has taught us anything it is the fact that there is more to this than mere physical structure.

Brian Neal wrote “They are my mates pics & birds, but I fly the exact same birds, cant say I’ve ever noticed the donut hole, far from loose rolling birds that’s for sure, lol, a few World Cup judges have seen them, more praise than criticism on their performances, he got 2nd place in the wc on his 3rd year flying them also. 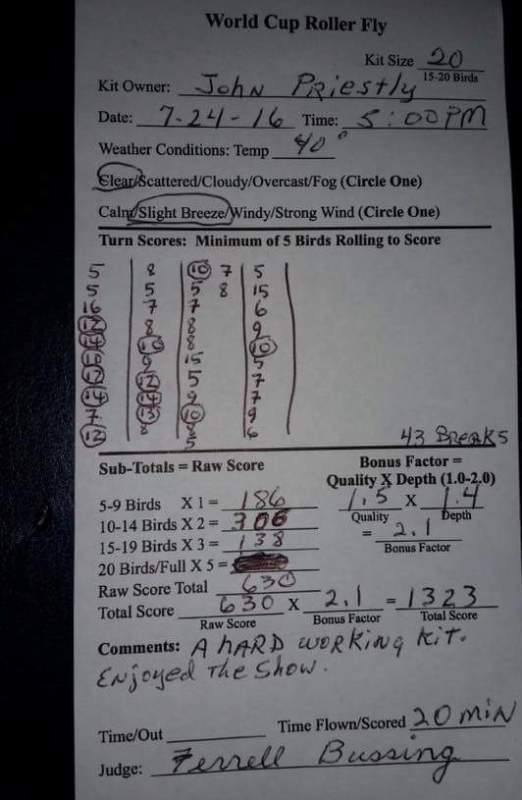