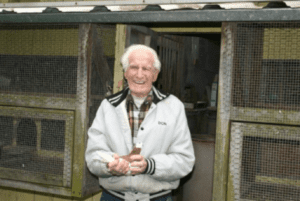 TY: When and where were you born?
DL: I was born in Portland, Oregon, and have lived here, except for one year, all my life.TY: How old were you when you first got into pigeons? Were they rollers, homers, fancies?
DL: I actually didn’t start with rollers, which seems to be very common with us roller fellas. I started in homers eight years old competing with my brother until he went into the service and then got married.TY: About what age did you get into rollers and do you recall how you got your first rollers?
DL: I started with rollers in 1956 and have raised American Rollers ever since. I competed for many years with these American Rollers.TY: The family of rollers you’ve had, where did you get them from? Have you added any more birds into the family?
DL: I got some of these birds from my brother when he had some problems with his neighbors and even found a small roller ARC banded by Fred Skusifavva that was sold to a dog trainer. It was a nice typey roller. That was the genesis of my family. People often ask how American Rollers came to be, and I believe they were from Birmingham Rollers and were bred to a slightly different standard but they perform just like Birmingham Rollers. When I found a roller I liked, I would pinch it, if I could, and I have not added anything to my stock from 1975 until I met Don Simpson of South Carolina. We became friends and I eventually got some birds from him. Those are the only birds I’ve added into my family since 1975. All my birds have a clean beaks, pearl eyes, and no muffs. This is also the standard for American Rollers.TY: Did you ever have the chance to fly in competition?
DL: Yes, I did fly in competition quite a bit in the ‘70s and ‘80s. I even won the 1983 International Fly with my family of American Rollers and we flew against the Canadians and the late great Monty Neibel. That is one of the flying accomplishments that still makes me gleam. I also keep some show rollers, but they are much bigger and do not perform like the American RollersTY: What clubs have you belonged to?
DL: I have belonged to numerous pigeon clubs throughout my lifetime. I was part of the American Roller Club from 1959 until now, the Northwest Roller Jockeys, the National Birmingham Roller Club and the Piedmont Roller Club. In 1988, I asked Bill Barrett to come and judge and George and Pat Mason also came along. We judged along the northwest coast, along with Utah, up to Canada.TY: What are your memories of the first World Cup? What was your role and who else was involved, that you can remember?
DL: I was the secretary at the time and the main guys involved in the creation of the World Cup from the international fly were Max Runyan, Dick Rickner, Randy Lewis, Leonard Kayhoot, Gary Stephens and Darrell Norris from the Jockeys. From the seven of us spurred the idea of creating a true international fly involving . So we sat around trying to find a name and the name World Cup was agreed upon. I think it might even be Doc Riemann, who was the general coordinator for that first World Cup, who coined the term. Doc Reimann called me and asked me to be the judge and I was honored to be the Finals Judge. Outside of the USA, I judged competitions in for seven days and I also judged their show as well. I thoroughly enjoyed my trip to and it was great to see Bill Barrett and George Mason again.TY: As a man who has been in the hobby for decades, do you recall seeing a kit that blew you away? If so, whose kit and do you remember when it was?
DL: Monty Neibel had good kits and he probably has as good a kit as I’ve seen anywhere. Bill Schrieber also had as good a kit as any I’d ever seen, although he stopped flying competitively by the ’80s. There is not a single kit that stands out above the rest, to my memory, as the best kit I’ve ever seen. Oh, another man who was a fantastic breeder and flyer was Lloyd Thompson of . Boy could he fly birds. But still the same, I don’t recall one kit being the best. I do remember the single best pigeon I ever saw, and that belonged to a younger fella named Adam Hill of Utah. That bird was just a screamer; the single best pigeon I have ever seen.

TY: Did you ever imagine the roller hobby would become what it is today with competition and everything?
DL: I never imagined the hobby would become this big, ever. I honestly think the World Cup was the best thing to happen to the hobby as it allowed every flyer the ability to compare his birds and his management skills with the rest of the world. Since I have been in rollers, everyone has had this fear of the roller hobby dying; but each decade, the hobby has increased in size and participation from what I have seen.

TY: Did you have any mentors when you first started, and who were the men you looked up to or considered very close friends?
DL: Bill Schrieber was the man I considered my mentor and one of my closest friends. We traveled a lot together and I spent a lot of time with Bill. He was a very kind man. I also think the world of Henry Cook, Ellis McDonald and Don Simpson. They are all world-class gentlemen.

TY: Is there anything you would like to say to the roller fanciers around the world?
DL: Pigeons is only a hobby; they are not to make money. I believe that family should come first. Keep flying and keep the hobby alive.