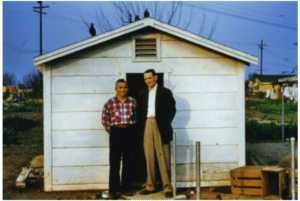 TY: Hi Mr. Coderre, can you please state your name, where you live and your age before we start?
HC: My name is Homer Coderre, I live in southern California and I am 95 years old.

TY: How old were you when you first got into pigeons? Were they rollers, homers, fancies?
HC: I first got rollers at the age of 12 when I went to visit a friend I hung around with when I was 10 and when I was 12, I waited out in the yard and his father was looking at the sky. I asked him what he was doing and he said he had a race and was waiting for the bird to come in and I had no idea what he was talking about but when I saw that pigeon come in, I was hooked. He eventually strayed in a few rollers and he had no use for them so he gave them to me. They were banded by a doctor Sanka and it rolled about 50’ and I wrote to the fellow and he sent me more pigeons.

TY: The family of rollers you have or had, what do they go back to, meaning where did you get them from? Have you added any more birds into the family
HC: Most of my pigeons went back to the original imports because I was from Massaschusetts but I was never much of a pedigree man. I cared for performance more than anything else so I don’t care who or what it came from. I care for what is is in the air, it’s always been about the performance of the pigeon. I eventually got them from Fred Perry and other guys and if I saw a pigeon I liked, they gave them to me for free and I was so appreciative of them for what they did for me, I eventually ended doing the same thing because I remembered how I felt; I have given away about 90% of the birds I’ve raised. I used to visit Stan Plona a lot in the 40s and early 50s before moving to California.

TY: There is a prominent picture of you standing with Bill Pensom in front of your loft, do you recall that particular picture?
HC: Bob Evans invited Pensom to come and visit us with Lester Lehmeyer so we were able to meet with Bill Pensom. The reason he came to visit with me was because another fancier had written that he had seen more performance from my pigeons than at Bill Pensom so Bill talked to Bob and that was why he came to visit me. Of course, my birds didn’t do very well that day but that was how Bill Pensom and I became acquainted. He eventually came and visited me a second time with my good friend Stan Plona. While I never acquired any birds from Pensom, I did acquire
some birds from Leroy Smith when I was living in Massachusetts. Bill Pensom once told me that Leroy Smith is such a good breeder that he would take his culls.

TY: Did you ever have the chance to fly in competition?
HC: I never flew much in competition but have always flown for myself. I remember when how I first met Cornell Norwood, he saw birds flying in the air and followed the birds to my house and he asked me if I had just flown rollers and I said yes. He came in and I told him if he liked anything he saw in the kitbox, he could have it because I had a lot of extra and Cornell picked two birds which happened to be the two best birds. That was the very first time I met Cornell and that was quite exceptional how he did that. But speaking of competition, I eventually did compete because of Van Copple. I met him when he was a 12 year old boy and Van Copple was the reason why I did eventually fly in competition and I flew with them for 5-6 years. Now show competition, I was never a show man, I enjoyed what they did in the air. I did enjoy shows because I enjoyed meeting all the fanciers.

TY: What clubs have you belonged to?
HC: I belonged to the PRA, the NBRC, the SCRC among many others that I have forgotten.

TY: As a man who has been in the hobby for decades, do you recall seeing a kit that blew you away? If so, whose kit and do you remember when it was?
DL: Yes, it was a man by the name of Cliff Wood, man he had the best single kit I had ever witnessed and Cliff lived about 5 miles away. Man them birds were rolling their butts off, they were so beautiful performing for over an hour, it was just incredible. Fred Windbigler was always so proud of his Jacs that he seldom ever got birds from anyone else and Cliff’s birds were the only birds where I saw Fred ask for birds. It was the quality and duration of the roll I was impressed by, to work for over an hour and not slow down. Now the deepest, fastest, most stable roller I ever saw was by Reggie Stewart of California. He had a pigeon that rolled 50’ at least every couple minutes consistently. That was a beautiful deep roller and that was after flying over 30 minutes, even after the kit landed, the pigeon kept performing these 50’ rolls so its stamina impressed me as well.

TY: Did you have any mentors when you first started, and who the men you looked up to or considered very close friends?

DL: I think one of the most knowledgeable fanciers and a man I would put at the top of the list would be Dave Sanchez. If I ever needed a bird, I would go to Dave. Way back when I first started, Marty Slazer really helped me understand what a good performer was but it is so hard to single anyone out because I have met so many guys so it’s a bit unfair.

TY: Is there anything you would like to say to the roller fanciers around the world?
HC: Performance is always the most important thing so choose for performance first and foremost. Color, eyes, and everything else has never been important to me. In the end, it’s about what the bird does, not what it looks like. If the bird was yellow or orange, if it did it right in the air, I would keep it because that is what we should focus on. Enjoy the birds and enjoy the men who raise these bird regardless of what they look like or who they are from.