The NBRC Championship Fly is over!

Congratulation to Region 5’s Dennis Blackmore on winning both the 20 Bird Championship and 11 Bird Championship on the same day!!! Dennis scored 730.24 pts with a 1.6 quality x 1.4 depth multiplier in the 20 Bird Fly. A couple hours later he scored 408 pts in the 11 Bird Fly to win both crowns!

An amazing feat by Dennis and what a feeling it must be for him to first win the 20 Bird and then follow up with the 11 Bird win! You did it Dennis!.

History Has Been Made in the 2019 NBRC National Championship Fly!

November 13, 2019 was the last two flys of the National Championship Fly.   Dennis Blackmore had qualified in Region 5 for both the 20 bird fly and the 11 bird fly.

Now a little bit about those qualifying flies. Our region’s Qualifying Fly had been dedicated to Bob Westfall.   Bob had been a long-time supporter of the Birmingham Roller and the competitions.

The weather during the qualifying fly week was awful. Cold, windy, rainy, etc.   A few of the guys didn’t even fly because the weather was so bad. When it came time for Dennis to fly the wind was up and the birds went high and away but scored enough to qualify in the 20 bird fly.   Unfortunately the birds flew over 2 hours and when they finally came down he wasn’t sure about putting up the 11 bird kit.

When he opened the kitbox and let the 11 birds out, one went up and immediately rolled down, but it didn’t’ stay down, it went back up and joined the kit. But then the kit was hit by a hawk – twice. Fortunately no birds were lost to the hawk and they still managed to squeak out the qualify win for the 11 bird qualifying fly.   Sadly, Dennis reported that as the 11 bird kit was coming down during the regionals, everybody had left already, and the deepest and very frequent black pigeon rolled down and died trying to land in the wind. He was a real point getter!

Marty Thomsen wrote about the regional fly: I had the pleasure to judge Dennis’ birds in the regional. I could see they had potential for much more but winds throughout the whole 5 day judging of region 5 held so many kits back. However Dennis’ were still best on the regional when he had top kits in both flies.

And that brings us to the 13th day of November. Two days before it snowed and was bitter cold. Dennis fed the birds a little more because of the temps and had already decided that if the winds were too high he would not put them in the air.

All other flys across the Nation were complete and Ferrell Bussing had just these two flys to finish up his 45 days for judging the National Championship Fly.   The sky was overcast, and temps fluctuated back and forth between 40 and 45. Winds were somewhat steady around 15 mph.   In attendance were Dennis, Ferrell, Danny Sturgeon, Dan Galarza and Mark Fields.

The 20 bird kit was released and came out popping.   Those birds worked well in unison. There was a black white flight was a pure joy to watch. It has style, speed and depth. (Your author predicts this bird will end up in the 11 bird team or stocked.).   They kitted nicely but every once in awhile they would “explode” – birds scattering everywhere like they were hit with a wind gust.   They’d regroup and go back to performing.

Around the ½ way point they went high – really high and slowed down with performance. Did they see a raptor? We don’t know, but fortunately they came back down before time out and went back to spinning.

After the time was up and the guys were heading into the house to figure the score there was a jaw-dropping break right over the top of the house. It was a break by which I will judge kit performance going forward – and it didn’t even count in the score.

Remember Dennis had fed the birds up – well yes there was plenty of time to work on the score because those birds landed and then took off again.   That’s OK because Ferrell and Danny figured and refigured the score to make sure it was correct.   Like someone said “It’s better to have scratch marks on the sheet than it is to find an error later.”

We all gave Dennis our congratulations on winning the 20 bird fly.   And he hadn’t just squeaked by to win, he did it by a wide margin.   Pretty nice for a team that wasn’t even going to go up if the wind was gusty.

Danny Sturgeon reminded us “This spring in the World Cup Dennis was the 2nd qualifier for this region. He passed flying because he did not think his birds would do well. That was the 20 bird kit just flown”.

As we were walking out of the house to view the next kit, Danny Sturgeon told us that while we had just seen a good fly, there was potential for an even better fly with Dennis’s 11 bird kit.   Truer words were never spoken.

The temps were hovering at 45, skies were now broken a little and the winds had dropped to closer to 10 mph.   Dennis opened the kitbox and birds came out – and guess what – one immediately rolled down but went right back to the kit. At first we thought it was going to fly as an outbird or land but no, that tough little featherball shook it off and flew like a champ. 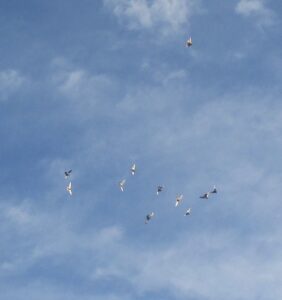 The upper level winds made the kitting a little looser than Dennis would have preferred but it was still acceptable.   But honestly that didn’t matter one bit because those birds SPUN.   Ferrell was rattling off scores, Danny was scribbling like mad and the rest of us could look nowhere else except to the skies.

That 11 bird kit worked like we all dream our birds will someday.   Fast, frequent, stylish and deep.   In that group there was a blue check that was a sight to behold.   Anyone who knows me at all knows how I despise blue check pattern but if Dennis had handed me that roller, I’d have died happy.

The time for that fly just flew by. Even when the hawk cruised through the birds just shifted their fly space, took a short break and went back at it.   What is amazing is that when the time was up they were still working – they were not broke down or wore out.

As a side note, I want to give a shout out to Graham Dexter. You changed my roller experience with those Belay glasses. My spine in the neck is fused in all but two spots and looking up was literally a “pain in the neck”.   Using the glasses I was able to watch the kit with ease.

Ferrell and Danny went to the house to calculate and recalculate the scores. The initial thought was that the 11 bird kit had come up just short of a double-win, but soon it became apparent that Dennis had made history – he had won both flys and both wins were accomplished as the last flys for the entire season.

Now something you need to know about Dennis’s program. He and good friend John Hayworth had worked together. Even though he was working with John, he rarely raised more than 3 dozen birds, most of the time less. He only uses half a dozen pairs as breeders. 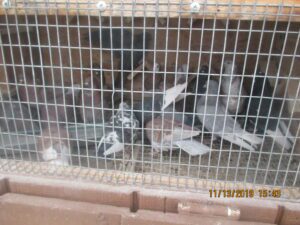 A question that always comes up is “What family do you raise?”   Dennis worked closely with John Hayworth and Dennis built his flock on mainly Starley/Miller with a dash of Argent thrown in.   This tight breeding gives the consistency and performance he wants.

Another interesting point to his program is that he does not do separate matings for the 20 bird fly vs the 11 bird fly. He chooses quality overall then moves the deepest birds to the 11 bird kit.

Many past winners raise large numbers of birds and then pick from them. Here we have a Champion Flyer who does just the opposite. Dennis focuses on just a few prime birds and trains them hard.   Who can argue with a program like that when the results speak for themselves?

Another question that often arises is how the flyer preps for the competition fly. I did ask Dennis and he said he did nothing different other than feeding them up just a little because of the bitter cold they had had.

I am so glad that we had the opportunity to stand under both of the kits and see them first hand. History was made and I was there to see it!

When Dennis proofed this for accuracy, he commented that he wished John Hayworth had been there to see the fly.   I like to think he was up above, watching and rooting you on!   You guys did good. 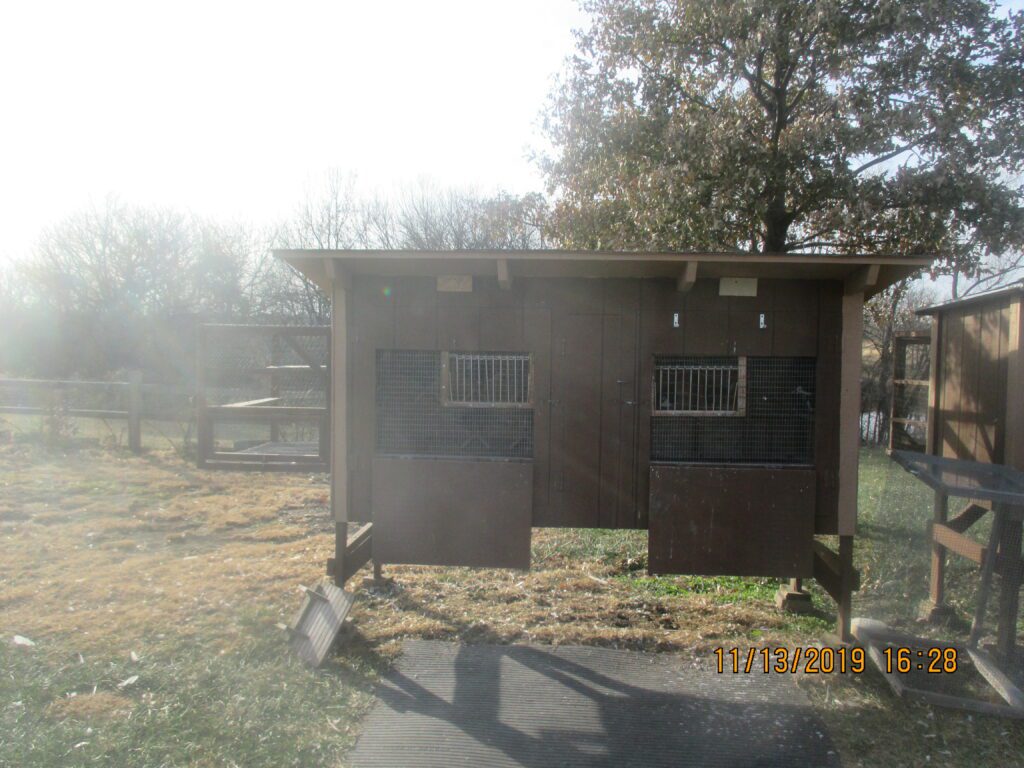