Skip to content
Our thanks to the South African Distance Roller Pigeon Federation for sharing this article on the history of Birmingham Rollers in South Africa.

The SA distance roller pigeon. Why the name and where did these roller pigeons come from? In this article the story of this breed’s history unfolds, and the reason behind the name SA Distance Roller Pigeon is revealed.   Very little was recorded about these pigeons in the early years, and it is speculated that these pigeons were developed out of West of England and Oriental roller pigeons, but this is not a confirmed fact. Up until 2000, these pigeons were known, by the people who kept them, as local roller pigeons or Locals as apposed to Imports or Birmingham’s.    A part of the origin of the SA distance roller pigeon, as it is known today in South Africa, can be traced as far back as 1945 when the first Birmingham roller pigeons of British born fancier Ken White were imported to this country. Other local fanciers, like Tommy Alison and Henry Scott, also imported pigeons from Britain and other parts of the world. 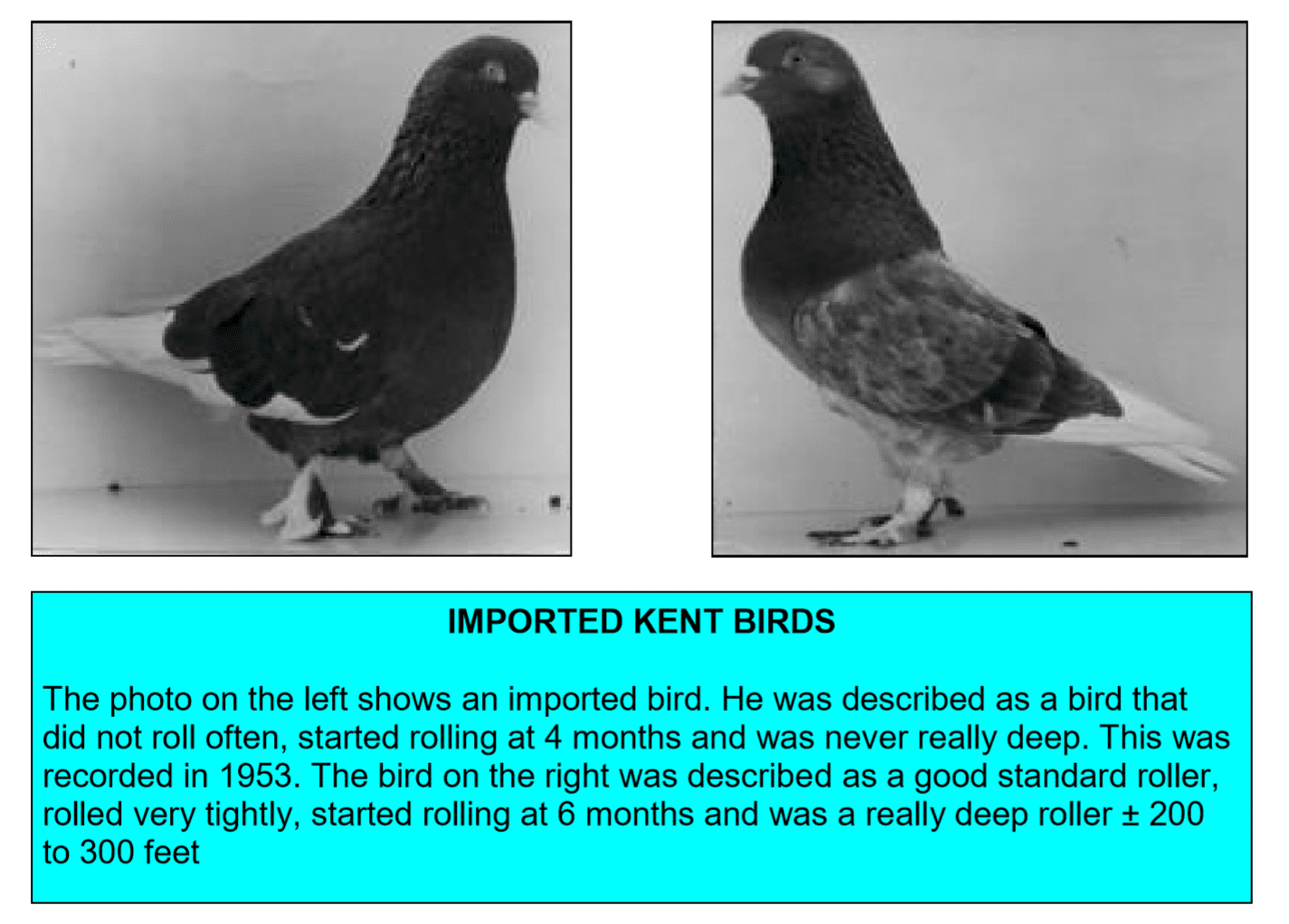 It was purely by choice that the SA distance roller pigeon came to be. The fanciers that imported the Birmingham roller pigeon kept by the British standard and rules of kit performance. These pigeons had to be very active and had to roll as many times as possible during a competition and for this reason the ideal pigeon had to roll only between 1 and 2½ seconds. But some of these imported pigeons had the tendency to roll much deeper than required. These undesired pigeons were usually culled to ensure that this quality was not repeated or passed on to the next generation.  But these bad performers and deep rollers caught the attention of some fanciers who started collecting them and selectively breeding with them, and that is how the local South African roller pigeon, now known as the South African Distance Roller, came to be. In the years that followed, more and more of these pigeons were bred and more fanciers preferred these pigeons above the performing kit pigeons. Through the breeding process of the Birmingham rollers and other imported breeds, three strains originated and each and every pigeon today, in some way or another, carries the genes of these strains. The strains that were formed were the Kent, Ketap and Goodrum strains.

The Kent strain was bred from imported Ken White pigeons. These pigeons were usually robust in build and known for their depth in roll and strong flying abilities. They usually took a long time to become active rollers. 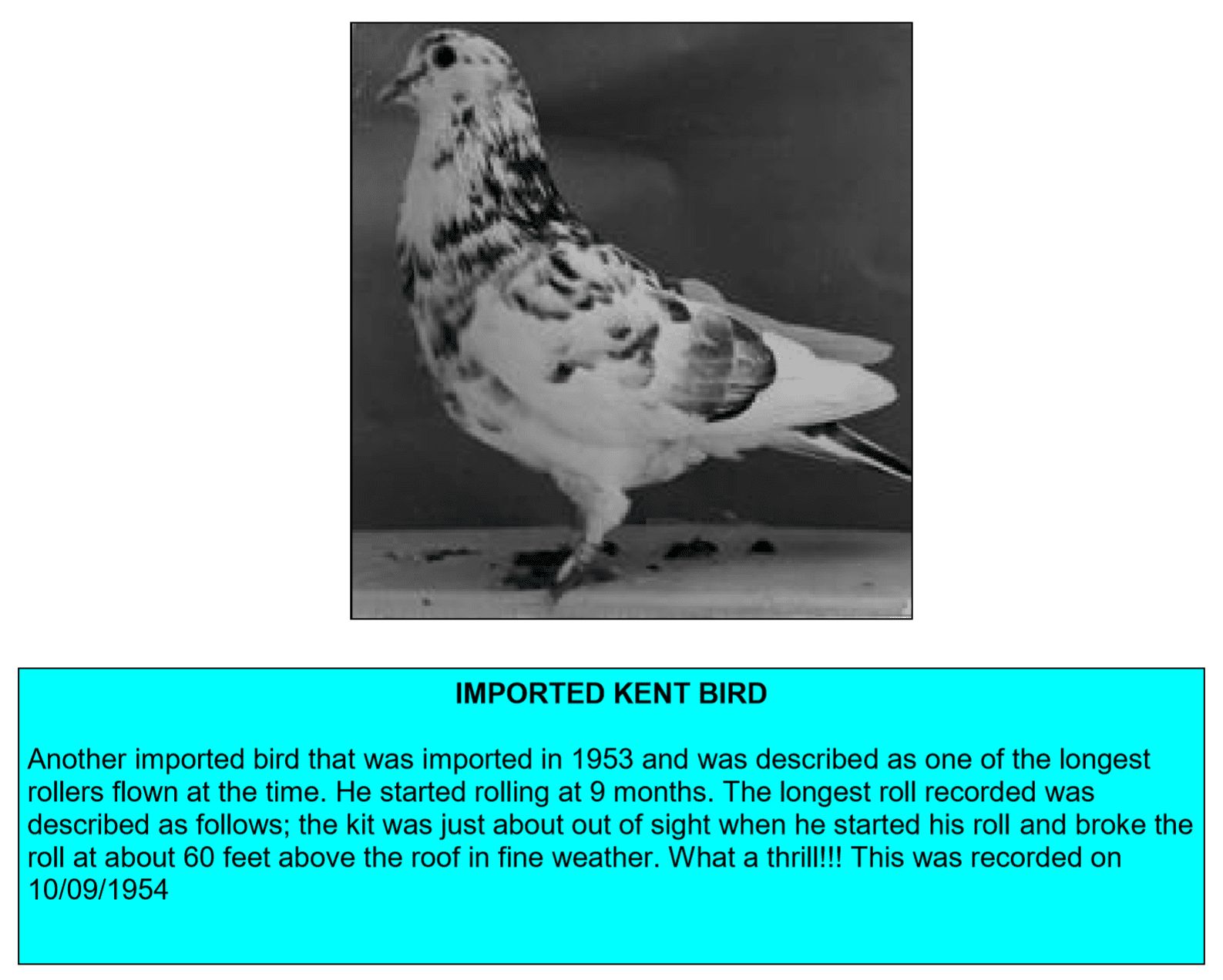 Sometimes up to two years would pass before they started rolling, but on average they took about seven months to start rolling. Out of this strain many other families were developed, like V-Tail, 704 and “Krulveer” (Frill) to name but a view, but their origin was all from the Kent strain.

The Goodrum strain most probably originated out of imported pigeons but their country of origin is not known today as it was never recorded. These pigeons were bred by Dr Goodrum who at the time lived in the Eastern Suburbs of Johannesburg.  They were medium in build, clean legged pigeons, mostly mottle in colour. They were also known for their ability to roll very deep and were very good flyers. 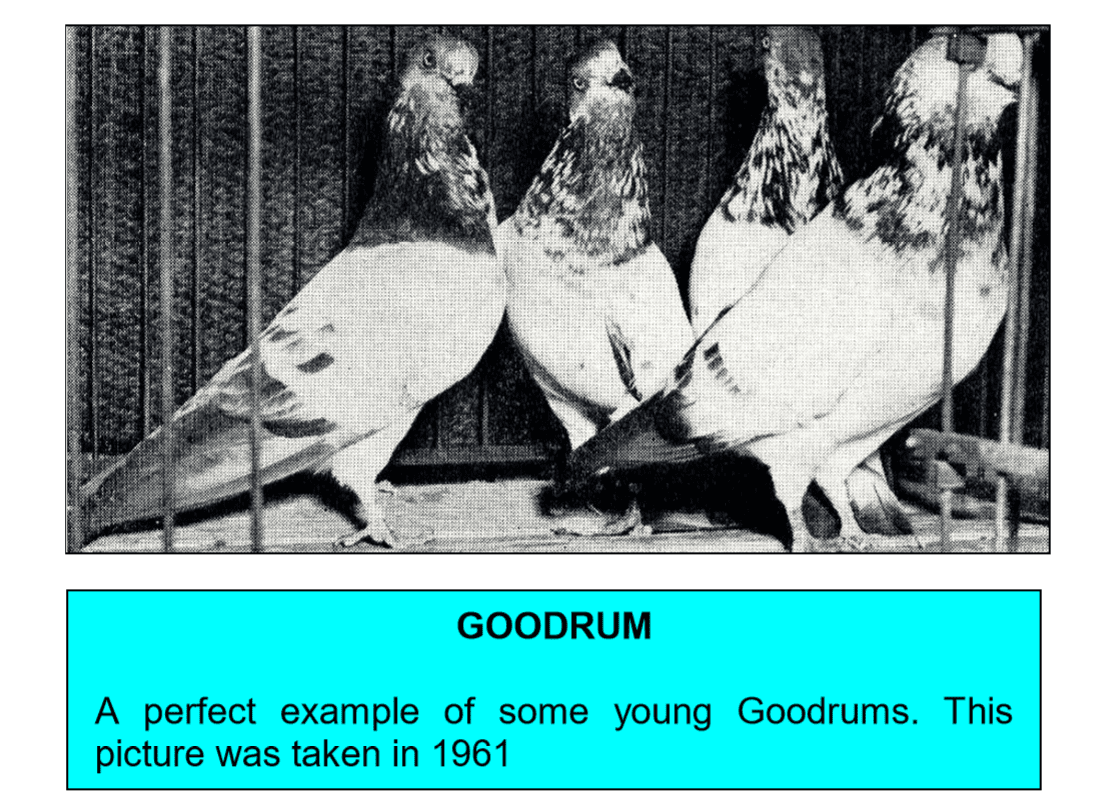 These pigeons also took some time to become active rollers but not as long as the Kent strain and when they did it was usually a spectacular site to see. 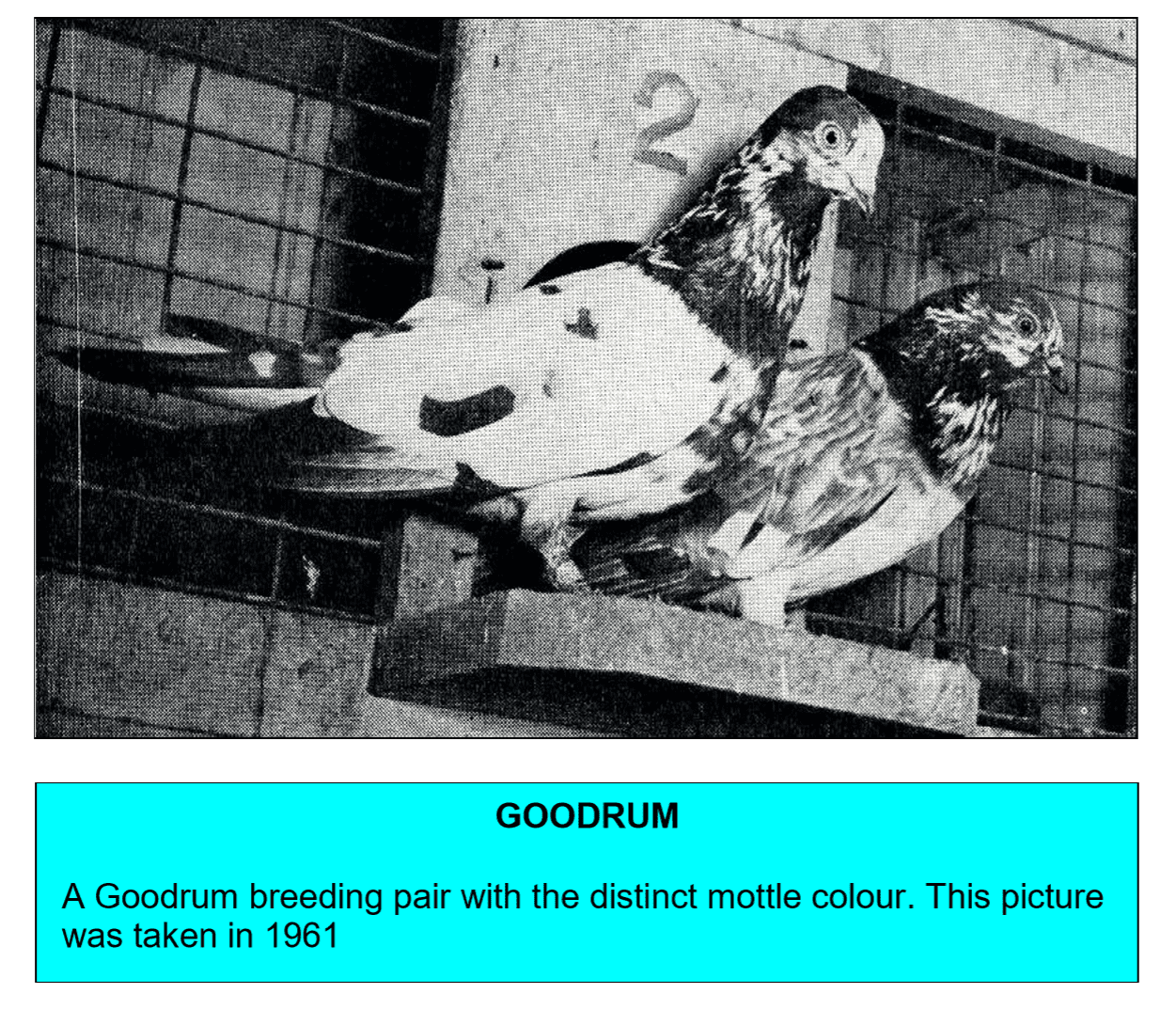 It is believed that the Goodrum strain was developed out of the American High-Flying Tippler (Roller), thus giving these pigeons their strong flying ability and their distinct mottle colour. 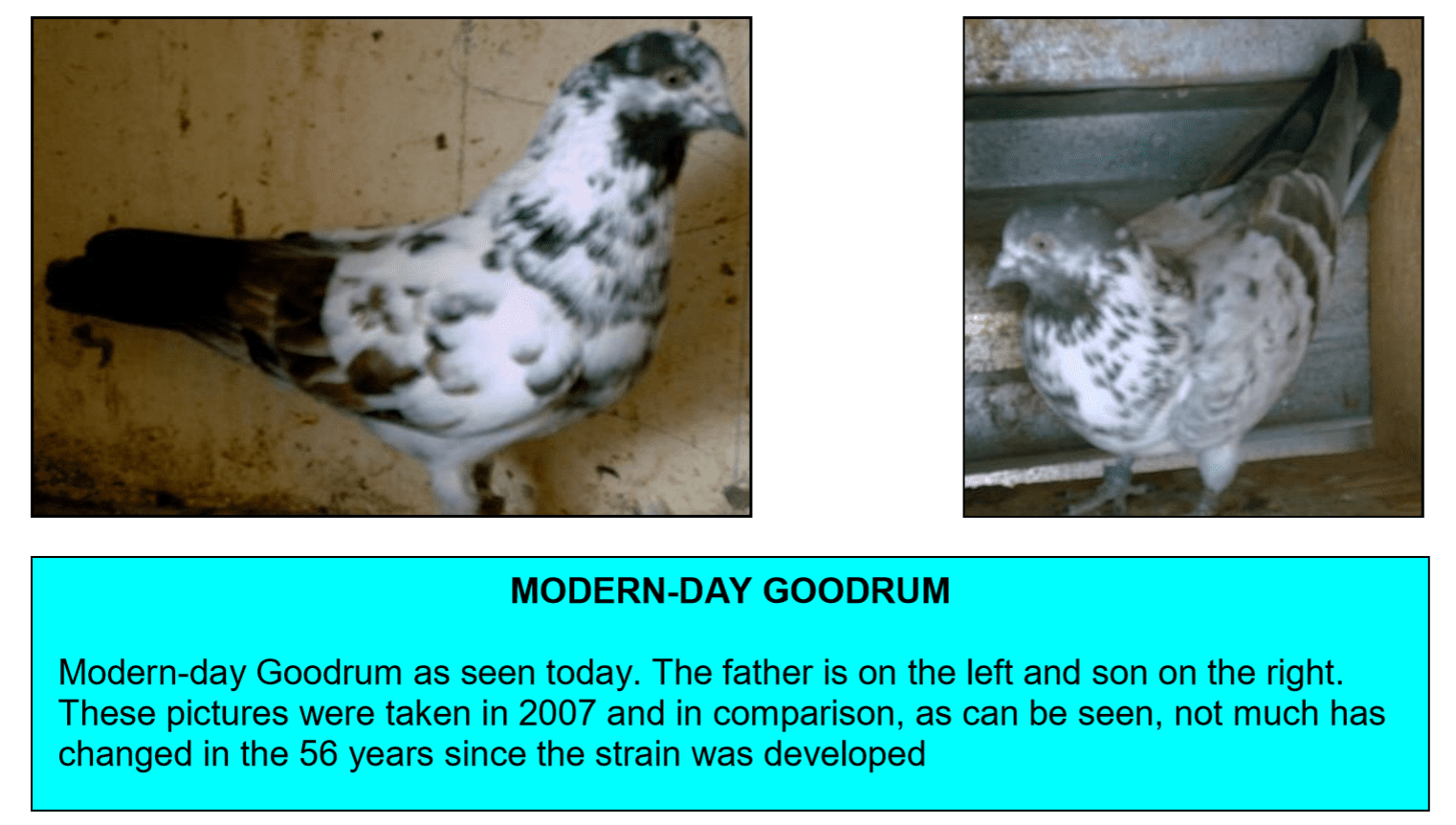 The Ketap strain was bred by Brendan Ketap, also from the East of Johannesburg, and again no records were kept as to where their forefathers came from. These pigeons were small in build, and mostly muffed pigeons with the ability to roll deep. They, however, did not have the strong flying ability the Kent and Goodrum strains possessed, but they were sought after for the one quality that these other two strains lacked, namely activity. These pigeons became active rollers at a very early age, sometimes only weeks after weaning, and at the same time they were very frequent rollers, sometimes rolling in such succession that it became impossible for them to fly back to the kit and regroup, making them unsuitable for competitions in the purebred form. 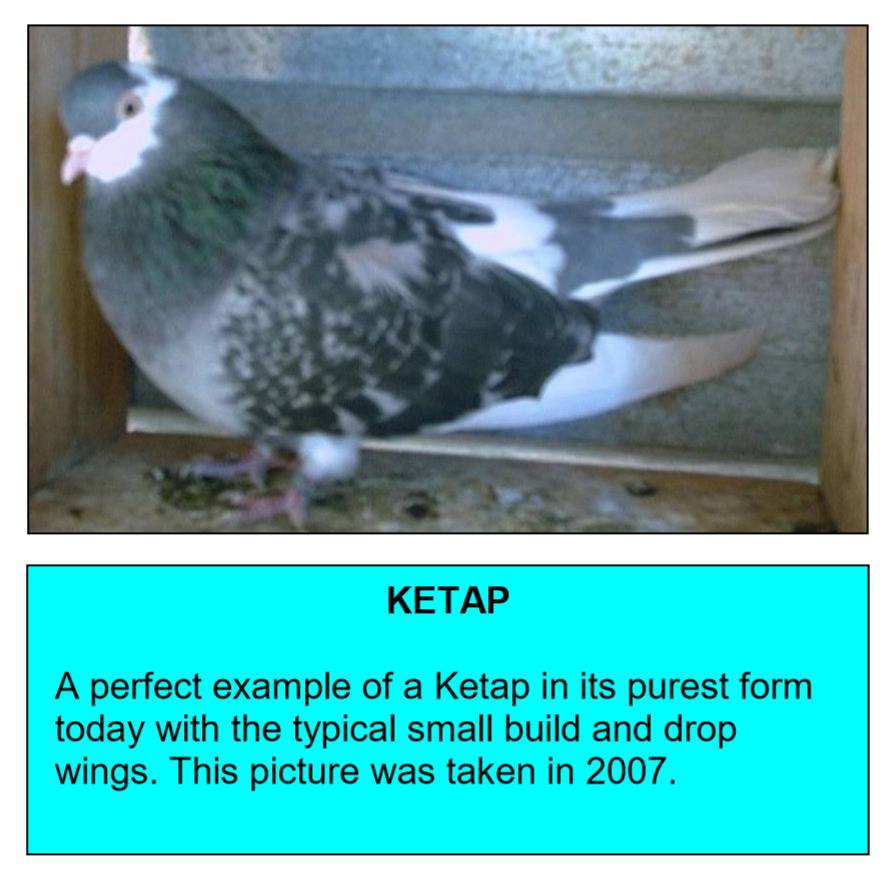 Combining the Ketap with the Kent or Goodrum strains or combining all three strains together resulted in the perfect combination of flying and rolling ability and the perfect competition pigeon with the ability to roll deep and frequently and still have the strong flying ability to fly back to the kit and regroup irrespective of the distance rolled.
Only a handful of fanciers over the years kept these strains pure. They were fanciers like Buks Swart, Sias Frylinck and Dames Nell. Unfortunately, many of the fanciers cross bred these strains to develop substrains of their own liking, for example the 801 strain that was a mixture of the Goodrum and Ketap strains.
In a sense the three strains are still there in each and every distance roller pigeon bred today but it is now difficult for the modern-day fancier to determine what percentage of which strain he is dealing with in his pigeons.

For many a novice, this is to be the biggest downfall. The process of identifying the characteristics of the individual strains, identifying “click pairs” and building up their own breeding stock just takes too long. Because they lack patience and experience, they usually want instant results and if that is not forthcoming, they give up after a few months, sell everything and leave the roller pigeon sport for good. This is mainly the fault of the older and more experienced fanciers because very few fanciers keep pedigree records of their pigeons, thus making it an impossible task for a novice to know what strain he is buying from a fancier.

But for the fancier that keeps record of his pigeons, only one word can describe the outcome and that is success! The SA distance roller pigeon is bred for one purpose, and that is to perform long deep rolls. Over the years many records of pigeons that rolled 20 to 30 and even over 50 seconds were noted. Unfortunately, a lot of these were roll-downs and for the few that stopped before rolling down, the enormous task of flying back to the kit was just to immense and they would normally fly for a few minutes then come down.

In the years that followed, many deep rolls that did not result in roll-downs were recorded. Some examples are: 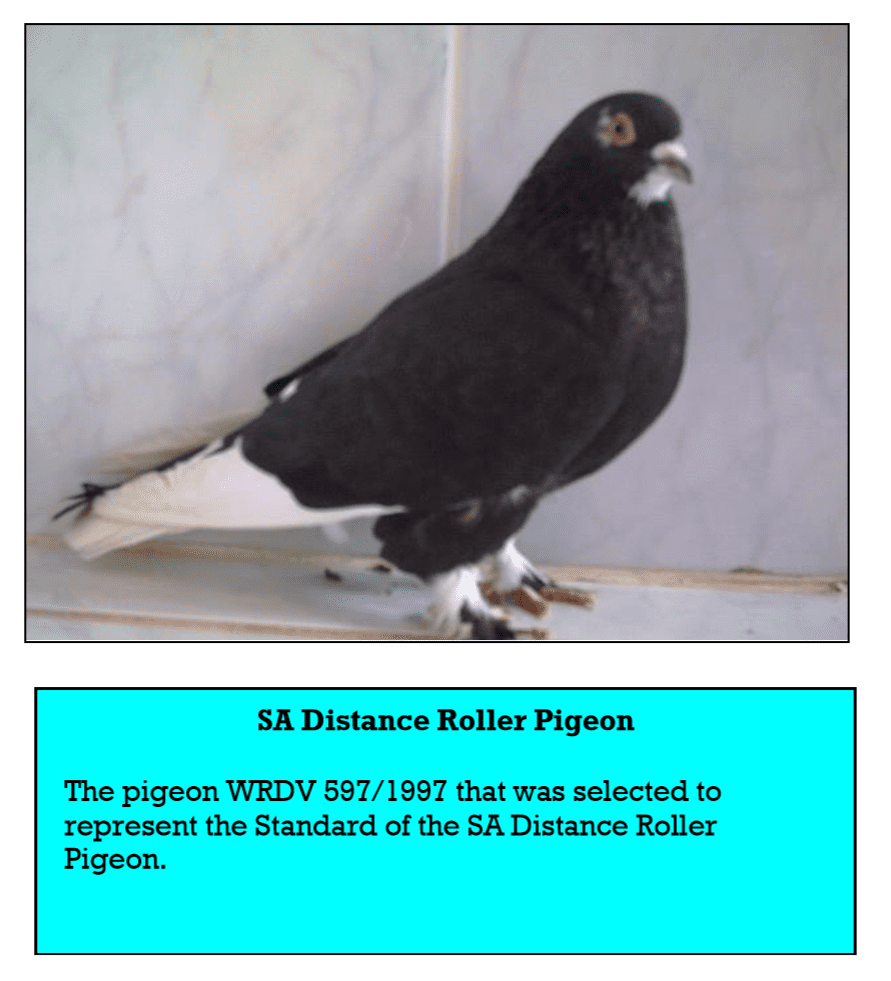 Eventually 60 pigeons were collected, put on show, inspected and scrutinized to the point where only two suitable pigeons remained and in the end, a black white flight muffed cock WRDV 594/1997 was chosen as the perfect pigeon to represent the local roller pigeon.

Christo Munnik then, by close inspection of the pigeon, wrote the standard of the local roller pigeon that would be used on fancy pigeon shows held throughout South Africa. He still had one problem he wanted to address, namely, which name the pigeon should be registered under. Although the pigeon was known as the Local Roller for as long as anybody cared to remember, the name just sounded out of place in comparison with Birmingham Roller Pigeon, S.A. Short Face Tumbler, Dutch high flyer, Egyptian Swift and Chinese Owl Pigeon. The fanciers present agreed but were at a loss as to which name should be used to identify the local roller pigeon. But then the years of experience and the ingenious mind of Christo Munnik kicked in and one question was asked, namely, what the characteristics of the local roller pigeon were. The answer was obvious: its ability to roll great lengths. In other words, the local roller pigeon was bred to roll great distances and has manifested itself over the years as a truly South African breed. Christo suggested that it should be called the South African Distance Roller Pigeon. This name includes the origin of the pigeon, South Africa and its characteristic as a distance roller, thus its purpose for being in existence.