What Is a Dun/Dunn, Really? I’m Done
Tou Yang

In every walk of life, in every segment of society, and in every part of the country, language, lexicon, and jargon is used differently and may mean different things to different people and that is absolutely fine. And then there are certain terms that have been long used incorrectly and thrown around so much that they may confuse someone who is not familiar with the incorrect definition and it happens in our very own roller world. One word I often see that causes a lot of confusion is the word “dun” or “dunn”.

The phenotype, dun, is a dilute spread blue pigeon or a dilute black pigeon. This word is universal in the pigeon world regardless of breed…except for rollermen, although not all. Many rollermen, especially those from southern California along with many from days gone by, will use the term dun/dunn in slang term to incorrectly refer to either a spread ash red bird or an ash red t-check bird with darkening modifiers such as sooty, dirty, and often times smoky. Some call this California dunn to denote the difference. This can cause much confusion as this roller fancier may describe and refer to his dirty, sooty spread ash red bird as a “dun/dunn” while another fancier calls a dilute spread blue (dilute black) bird a dun. Calling two very different things the same name does that but I think we are at a time and place now where information is readily available and we should correct this as ignorance is no longer an excuse.

We live in a world of technology where looking up a term or specific word means taking out a physical dictionary and searching for the word alphabetically. We literally have the entire, unabridged dictionary at our fingertips and encyclopedias are available just as readily. For example, I grew up using the word “peach” for both fuzzy peaches and non-fuzzy peaches. To my family and I, a non-fuzzy peach is still called a peach. As I got older, I realizezd there’s a word for that non-fuzzy peach that has been around long before my family and I existed and it has long been defined, accepted, and used by the world at large; that “peach” is called a nectarine and now, I call it as such. I could be stubborn and continue calling a nectarine a peach simply because that’s what I was told, regardless of all evidence. I could tell my wife I want “peaches” and when she comes home with a peach, do I have the right to be upset? Wouldn’t it be nice if my “peach” was the same as the rest of the world?

Back to rollers and, more specifically, the term dun/dunn. As noted earlier, there are currently two different “colors” of rollers for this singular term, dun/dunn and what should we do? I believe my real life example in the previous paragraph is a telling sign of what I think we should do and that we get everyone on the same page so when I say “dun” to a rollerman, he knows exactly what I am talking about instead of saying “is that the fuzzy one or non fuzzy one”? A true dun, and only dun, as defined, recognized, and used by all of pigeondom (except a large group of rollermen in the US, mostly California) is a dilute spread blue pigeon or in laymens terms, a dilute black. A dun is simply a black pigeon that has the dilute modifier which lessen the intensity of the black color, causing it to be a light, dull grayish color. A true dun is really a blue pigeon while the other “dun/dunn” is really an ash red pigeon and the easiest way to distinguish the two is to look at the flights and tail. A true dun will not have a tail bar and the flights will be about the same color as the body, a dull, darkish gray color. A California “dun/dunn” will have an ashy tail bar and ashy flights, like an ash red pigeon does.

The purpose of this article is to bring everyone together so we can all use a common language. Let’s call a nectarine a nectarine and a dun a dun so when I say nectarine, you know I’m talking about a nectarine and not a peach. It really is that simple it would go a long way in connecting us all. Now I’m done talking about duns. Below are pictures used with permission from the University of Utah which can be found at the following link: Genetic Science Learning Center, University of Utah, http://learn.genetics.utah.edu. 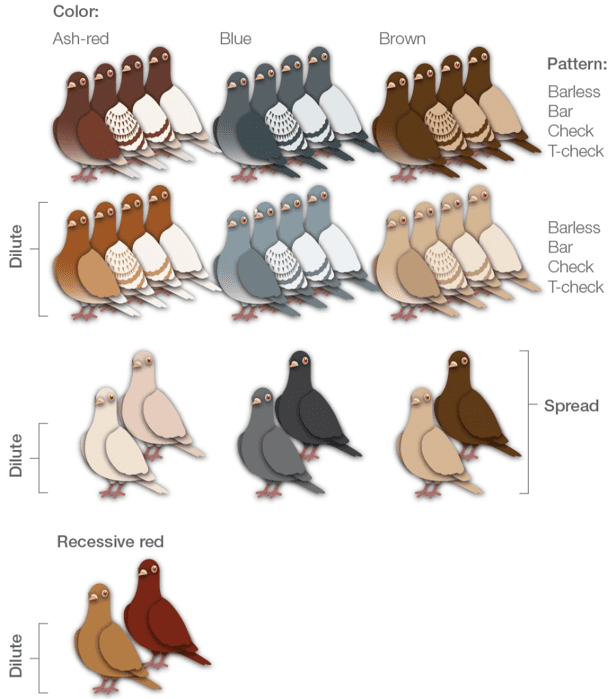 Below are pictures of various California duns/dunns, which are the aforementioned incorrect usage of the term dun/dunn which are really spread ash reds or ash red t-checks with darkening modifiers courtesy of Pao Lee, Gzlofts, and Jim Chang, respectively. This phenotype has also been called by other names such as plum or mahagony depending on how vibrant the ash red color shows in combination with the darkening modifiers.

A Note from Mark Fields

On my last trip to Bob Westfall’s loft before he passed we were discussing various birds in his young pen.   I picked up a “dun” and asked about this bird because his Jaconette family did not contain dilute.

Bob explained that this was a Spread Ash Red.  I was totally confused because I thought a Spread Ash Red would be silver or lavender.   He then showed me the parents, a black self and a nice little Ash Red.

He told me that the easiest way to tell if the bird was a true dun or a spread ash red was to look at the parents.   In later conversations with Frank Mosca he stated pretty much the same thing.

So, to my weary old eyes, the two are indistinguishable, but genetically they are very different birds.    To get true dun, you must have dilute in the family.