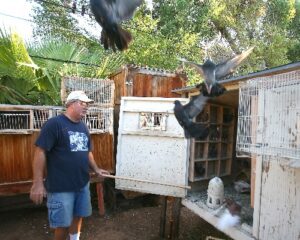 Sixteen years in and Don Macauley’s hobby is still a pain in the neck.

The Centennial Hills resident rolls pigeons, a competitive hobby involving training a domesticated breed of the birds to do rapid backward somersaults in flight.

Members of the breed, the Birmingham roller, are aerial superstars and enigmas rolled into one.

Some suggest that the pigeons roll in flight to thwart predators, while others maintain that the birds muscle spasm midair and recover.

“Nobody knows exactly why they do it,” Macauley said. “I think it’s a little of both.”

He breeds the birds at his home and controls their feed, all in strategy for pigeon rolling competitions. Points are amassed for how well the birds hold a circular pattern and how many roll in a 20-minute period. Macauley has collected awards and recognition for his pursuits.

“Everybody has their methods but nobody has figured out the magic potion,” he said. “You just hope you get a few to roll before your neck gets sore.”

He could talk for hours on the topic, just not when a kit, a term for a group of about 20 birds, is in flight and his mouth agape.

Macauley often has to explain his unique interest.

“Most people say, ‘I’ve got some pigeons on my roof you can come over and get,’ ” he said of misconceptions that he faces.

Wind and predators have gotten the best of some of his birds, he said.

Some get lost, and he tracks some of them down.

Each of his birds is tagged with its age and Macauley’s contact information.

Macauley wears the tag of his first and most prized roller pigeon on a chain around his neck.

Birmingham roller pigeons can live up to 20 years but have a life span to compete that is about three to five years, Macauley said.

Macauley, a lifelong Las Vegan, has raised birds his whole life. He built custom cages in a corner of the backyard for the pigeons.

The structures total about eight in a whole roost of bird cages that he shares and controls with son Richard.

His wife, Lynette, jokes about his devotion to the sport.

“There’s me and Richard and the birds, and I don’t know where we stand,” she said.

Macauley started into the hobby shortly after he and his wife wed. It has been known to consume him for up to five hours a day, he said.

“You’ve got to have a tolerant wife,” he said.

She joins her husband for some regional competitions and helps with raffles for the rollers’ wives.

He’s a member of the National Birmingham Roller Club. It is slated to gather for its 50th anniversary and convention Sept. 22-24 at the Imperial Palace, 3535 Las Vegas Blvd. South.

It’s also a year of firsts. Macauley directs and Las Vegas plays host to the convention for the first time this year.

He will be competing and hosting competitors from around the world.

The sport originated in Birmingham, England, as far back as the 1600s, Macauley said.

Breeders worked to enhance the tumbling speed throughout the centuries, yet there isn’t a scientific answer as to why they roll.

It doesn’t really matter to Macauley.

All of his hard work has culminated in a coined motto of sorts for Macauley.

“You can be possessed by the birds or you can possess the birds,” he said.