No Method of naming diseases is completely satisfactory; for in only a small proportion of cases does a single known microbe cause a recognizable disease. Frequently, one infection can produce several merging or distinct manifestations in various groups of birds, it may also show different signs in different species. Alternatively, one well- recognized group of clinical signs may be caused by several bacteria or viruses as the result of different pathological changes. Organisms, while not in themselves capable of causing a recognizable disease, may often produce a weakened bird which is pray to other mare pathogenic bacteria capable of creating a clear picture of disease.

These names are given to the disease caused by any one of the numerous related but different of bacteria called Salmonellae. They are closely related to Escherichia coli and belong to the family of gut organisms Enterobacteriaceae. Minor reclassification is constantly going on and new members are frequently being discovered. Although only a proportion of species or stereotypes are of importance in birds, the disease they produce may under some circumstance be severe. Many of the avian species and strains of Salmonellae are also capable of infecting reptiles, mammals and humans.

Paratyphoid infection infections are of special importance in many species of cage birds, especially in mixed aviaries, breeding establishments, pet shops, and indeed all places where a number of birds are kept closely together. Because of the relatively high incidence of the organisms in some wild birds, e.g. house sparrows, their presence in rodents and the almost inevitable by split seed and other food, transmission of infection to captive birds is a constant danger. In indoor aviaries, with brick floor and very fine mesh netting, such unwelcome species can usually be excluded.

Salmonella typhimurium, Salmonella enteritidis, Salmonella oranienburg , Salmonella antum and Salmonella parptyphi are examples of the many types which may be encountered in a wide variety of species which include among many others, doves, quail, pheasants, water birds of all kinds, canaries and other finches, sugar birds, parrots, budgerigars and robins. The majority of infections are caused by Salmonella typhimurium and smaller numbers by other Salmonella. In some birds, especially waterfowl and poultry, these infections can affection embryos in the eggs by contamination of the shell with infected droppings. Less frequently, and notably in waterfowl, embryo infection may be derived from an infected ovary. Because cage-bird eggs are almost all hatched in the nest and seldom artificially incubated, most Salmonella transference to nestling is probably from the parent birds soon after hatching. Incubator hatching, if perfected for cage birds, would in most species greatly limit spread in the young. The infection of adult of adult or growing stock occurs in three main ways;

Less commonly, infection is spread at shows or as the result of handling by visitors who have been in contact with the bacteria. Spread throughout an establishment is aided by overcrowding, allowing food to become stake, scattering seed and food where it can attract vermin, and other unhygienic practices. Flies and some parasites are also capable of transmitting the disease, while S. typhimurium is able to live for almost four months in stagnant water in temperate climates.

In an outbreak, the initial picture may depend on the source of infection and the age groups first affected. The severity may also depend to some degree on the type of Salmonella responsible. The severest and most acute outbreaks are usually seen in young birds, for example, when infected food is fed to parents and later to offspring. The parents at this stage may show little evidence of disease. However, low hatchability rates, dead-in-shell or weak newly-hatched chicks, and chicks “fading” during the first few days of life are strongly suggestive of the infection. The blood, of life are strongly suggestive of the infection. The blood, other tissues and droppings of such chicks as well as the parents’ excreta, are rich sources of the organisms. As little as ten per cent of all eggs may hatch, and all of these squabs may die before leaving the nest. The effect of a long established infection, however, may be much less spectacular. Newly-hatched squabs which are affected are likely to be small, weakly, bedraggled and produce loose droppings, giving rise to the condition call “sweating” by some breeders. It is sometimes thought that a single hen has merely been clumsy when the flattened dead chicks are later found in or thrown out of the nest, but poor hatchability in several nest should point to a more serious cause.

Losses usually start a few days to two weeks after eating contaminated seed or other food. According to the virulence of the organism and the susceptibility of the species concerned, clinical signs may last only a day or two with occasional losses over several weeks or, within 10 days of the first death, as much as 90 per cent of the growing and adult stock may be dead. Signs range from sudden death to gradual onset of depression over one to three days, accompanied by huddling of the birds, fluffed-up feathers, unsteadiness, shivering, loss of appetite, markedly increased or absence of thirst, rapid loss of weight, accelerated respiration, and watery yellow, green, fawn, or occasionally gray or blood-tinged droppings. The vent feathers become matted with excreta, the eyes begin to close, and immediately before death some birds show apparent blindness, inco-ordination, staggering, tremours, or other nervous signs including convulsions. In addition pigeons sometimes show arthritis, especially of the wings. A really sick bird seldom recovers even with appropriate treatment.

Diagnosis cannot be made on the basis of clinical signs alone. Confirmation depends on isolating the bacteria from the heart blood or lesions of dead birds and the droppings of live, recovered carriers, but this can only be done in a properly equipped laboratory. In an establishment where occasional losses have been experienced in several age groups, examination of droppings from birds which have been in close contact with the dead birds should be made because Salmonellosis can be well established before it is even suspected. When an infection is well distributed throughout the stock and established, but not causing heavy losses, it is said to be endemic or enzootic. When an infection suddenly wreaks havoc in an aviary, causing a high incidence of clinical disease and deaths, it is referred to as an epidemic or epizootic. Paratyphoid or Salmonellosis can produce both situations.

The blood-testing methods for antibodies (agglutination tests) used in the related pullorum disease or bacillary white diarrhoea (B.W.D.) of poultry and caused by S. pullorum, and fowl typhoid (S. gallinarum infection) have not been used very much for cage birds, but represent a useful means of identifying carrier birds harboring a particular strain of organism. Unfortunately, when small birds are infected, blood testing is impractical as sufficient blood cannot be obtained without seriously jeopardizing the birds lives. Negative results also sometimes occur in birds previously know to have bee infected. However, in cage, birds, recognition that a pathogenic strain of Salmonella is present in carcasses or in droppings is sufficient warning to commence remedial measures.

Infectious diseases of cage birds, particularly those of an acute nature, often present similar features regardless of cause. Salmonellosis therefore, especially in adults, can be confused with such infections as pasteurellosis or pseudotuberculosis.

It must be stressed that, short of destroying all infected birds, carriers and those in contact, it is unlikely that an establishment can be entirely cleared of the infection. If rodents or wild birds can gain access, they will soon be acting as a reservoir of the organism. Because of the individual financial and sentimental value of cage birds, treatment is more generally attempted than in the case of poultry. This reduces mortality and greatly slows the onset of new cases of clinical illness but masks infected birds by turning them into symptomless carriers. Treatment must be prolonged, and repeated at intervals in all valuable birds. Breeding should also be discontinued for the current year. Some would say that once birds are infected they should never be used for breeding again. Minor or major fresh out-breaks are to be expected in following seasons, especially if sudden change of food occurs, also during a cold spell or breeding, or indeed during any conditions of stress. The greatest success in treatment has occurred with the drugs furaxolidone and spectinomycin. Sulphonamides, particularly sulphadimidine and sulphadiazine are also quite effective in reducing losses and checking clinical signs. The tetracylines, chloramphenicol and neomycin generally appear to be less effective, although some strains respond reasonably well. It is advisable therefore to combine or alternate two or more of these drugs. Where drug-sensitivity test are available, which indicate the particular efficiency of either one or more drugs, these drugs should of course be used.

No commercial vaccines and sera are available, but some success has been reported with vaccines made from Salmonella isolated from birds on the affected premises. These ‘autogenous vaccines’ are said they their advocates to be helpful in controlling outbreaks where the infection is establishes. The most important factors for prevention are cleanliness, care in the choice and origin or foodstuffs, vermin-proof premises, isolation of new stock and all stock after visits to shows, and the avoidance of buying any but healthy birds, no matter how much of an asset their possession might appear to be. 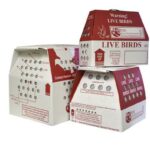